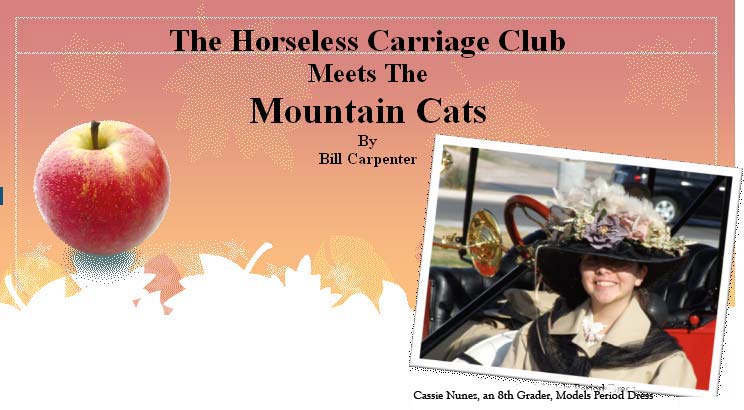 A noisy bunch of kids shuffled in, teenagers all.   Some were
chatty, some quiet, some lost in their teenage moods.   All
were "in school," which to a teen, was pretty much the
same as being in prison.   Their school mascot was the
Mountain Cat.
Mrs. Gagnon, the head of the History Department for Harney Middle School, a 30+ year veteran of the school no man`s land, a drill sergeant with a heart of gold, barked orders.   They all sat in crooked rows, vaguely curious of the spectacle before them -- two very strange-looking old cars, a table with boxes, a glass jar of water, a man in unusual, even funny, clothing, and a bunch of other stuff they could only imagine what it was.   So began my sixth class of the day.   Introductions.


"OK, it`s showtime," I said under my breath, and the spectacle began.   I only had a few moments to get their attention, or I would lose them - the most important moment of all.   I looked at a sullen group of boys and challenged, "Who`s the biggest, strongest guy here?" Immediately, most of them began to shout, "I am!" or "He is!"   Hooked `em!  Now, to set the hook.

"Well," I offered, "I`ll give you a chance to prove it!"     And off we went, with the Cranking Challenge, where the strongest boy could barely turn a starting crank, but after a little coaching, a girl did (a moment of triumph and defeat reversed, with smirks, hoots and laughter)!

A combination car and fashion show, strong man contest, math exam, career fair, chemistry class, and history lecture followed, all woven with a tapestry of colors, flowing around the 98-year-old car in front of them. They were learning before they knew it. They found out that rocks (carbide) and water chemically reacted sometimes to produce flammable gas (which let off a big "whoosh" to their surprise), how industry changed our lives, how so many brave pioneers in many disciplines worked together to discover aspects of metallurgy, chemistry, electronics, and more, to produce just one of the first automobiles.

And just what did that automobile mean? Well, it completely changed every aspect of life! Every part of society benefited - farmers, industry, health and medicine, communication, mining, etc, which began our modern world. I`m sure we had more interactive learning than many had all week.

The final challenge was the most daunting - "What will YOU do to better our world?"  I know it was effective, because this year their younger siblings knew the answers. They talked.